The Ministry for the Ecological Transition and the CNMC have decided to adapt the electricity tariff structure to the current social and technological situation. These changes are intended to encourage self-consumption and the use of electric vehicles, as well as to shift consumption to off-peak hours when consumption is at its lowest.

As of 1 June 2021, this will be the regulation* governing the methodology and calculation values of the access tolls and charges applicable to the electricity supply in Spain. Here are the main points to help you understand these changes.

Under the new method, consumers will be categorised under a structure similar to the current one. In other words, consumers are categorised based mainly on the voltage level they use to connect to the grid and, in some cases, on the amount of power they have contracted. Using this classification, as introduced by this Notice, the costs of distribution and transmission via the electrical grid are collected separately from other charges (other expenses relating to aspects of the system that are regulated), published by the Ministry for the Ecological Transition and the Demographic Challenge.

The new method also reflects the recent changes to the electricity market, establishing specific tolls for self-consumers of facilities that use the grid and publicly accessible electric vehicle charging points.

The new structure will be as follows:

In the table above, you can easily see which tariff will apply to you under the new system. The main difference with the current system is that all consumers will now have different tariff periods based on the time and month. In the case of homes, the 2.0TD tariff will have three energy periods and two power periods.

The aim is to incentivise consumption during the hours when the system has its lowest demand levels; thus, the tolls and charges will be cheaper during these periods.

The tariff distribution for a 2.0TD supply will be as follows: 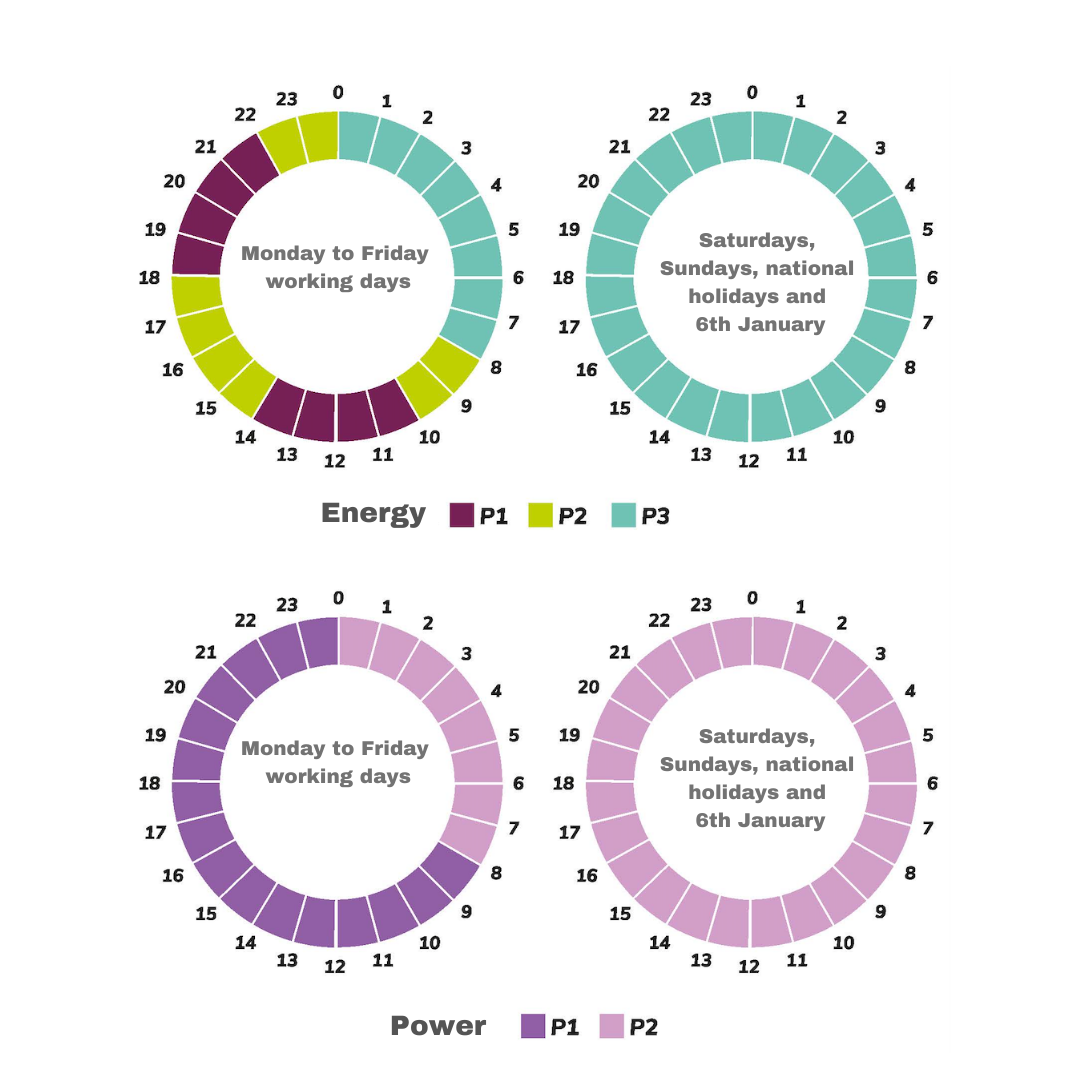 The seasons allocated to 3.0TD and 6.0TD supplies for the Balearic Islands will be:

The seasons allocated to 3.0TD and 6.0TD supplies for the Peninsular will be:

How are these tolls billed?

This multiplies the energy unit cost by the energy consumed during the corresponding period.

For domestic tariffs in general, everything will remain the same. Clients without a maximeter will not be able to demand more power than they have contracted as their counter simply will not allow them to.

However, the most significant changes arise for domestic tariffs with a maximeter and to 3.X tariffs that are currently billed under the famous “maximeter rule”.

Pdj: Power demanded in each of the hourly periods p in which Pcp, has been exceeded, expressed in kW.

i: Number of hourly periods consisting of the power billing unit cost of the corresponding toll.

For supply points with contracted power above 50kW, the power will be controlled as it has been up until now by taking readings every 15 minutes of the metering equipment according to the following formula

The excess power unit cost shall be calculated so that, given the average consumer profile of each toll, the access billing resulting from the optimisation of power will be equivalent to the access billing that would result from taking into account the maximum contracted power of each period. This is with the condition that the resulting access billing for period 1 after optimisation shall never be negative. The resulting unit cost shall be increased by 20% in order to discourage the contracting of lower power than that actually demanded.

Pdj: Power demanded in each of the quarter hours j of time period p in which Pcp, has been exceeded, expressed in kW. If the metering equipment is not capable of taking measurements every 15 minutes, the same power demanded in all quarters of an hour shall be taken into account.

i: Number of hourly periods consisting of the power billing unit cost of the corresponding toll.

This billing method will be exactly the same as for inductive reactive energy, with a penalty of 33% being applied to active energy consumption, excluding low-voltage tolls. In addition, the Notice adds the condition that high-voltage supplies must maintain a power capacity factor of at least 0.98 in period 6. Initially, the idea was to penalise excess usage at a rate of €0.05/kVArh, but for now, no financial sanction has been established in the final ruling.

How are power purchase agreements going to adapt to this change?

In order for supply points to adapt to the new legislation quickly and simply, below are the main differences between the current system and the new system.

2.0TD tariff: This tariff gives consumers the same power for the two periods under the new system as they have already contracted under the current system.

3.0TD/ 6.1TD tariff: In the event that a consumer changes from a tariff with 3 periods to one with 6, the following adaptation is made.

It is worth highlighting that once this Notice enters into force and the adaptation is made; consumers may change their power purchase agreement twice in order to adapt to the new periods defined in the Notice for no additional cost within 12 months from 1 June 2021, even if 12 months have not yet elapsed since the last time they changed their power, where technical requirements so allow.

The changes summarised here can be found in more detail in the following documents. The total cost for the end client will be determined by the sum of the distribution and transmission tolls plus the system charges determined by the CNMC and the Ministry for the Ecological Transition and the Demographic Challenge, respectively.